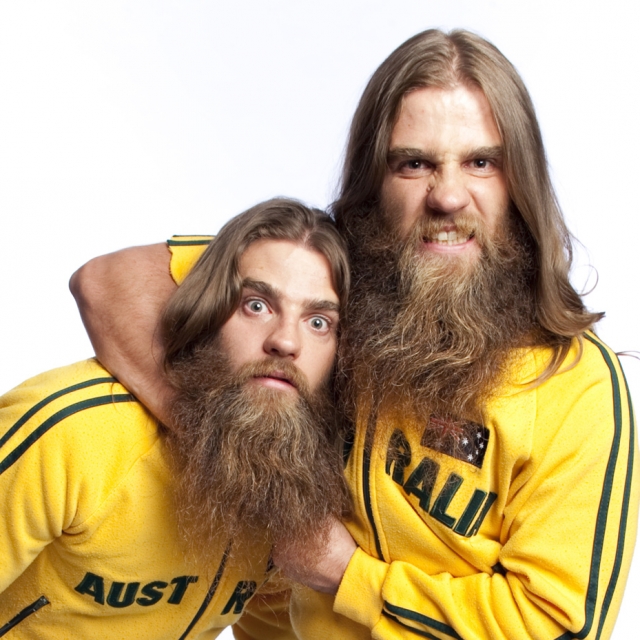 One of the most unique stand up comedy acts in the world, comedians, actors, school teachers, parents, sports fanatics and history buffs The Nelson Twins have been performing as a duo for over a decade. From their humble beginnings in rural New South Wales in 2006, the twins have fast become one of the most sought after double acts in Australia, dazzling corporate and club crowds alike with their cheeky humour.

Their big bushranger beards and cracking one liner jokes are just a part of an amazing act never before seen on the comedy circuit. The boys are constantly bickering amongst themselves on stage and are never afraid to tackle a comment from an audience member.

They have won several comedy awards in their short career and shown their versatility by performing to sold out audiences in Edinburgh during the 2010 Fringe Festival.

With TV credits include Australia’s Got Talent, The Footy Show, NBC’S Last Comic Standing and a host of TV and internet commercials for clients like Pepsi Next, X-Box and Canadian Club, in 2019 the Twins were flown to the UK to perform with a select number of global performers on Britain’s Got Talent: The Champions. The Britain’s Got Talent spin-off featuring a selection of notable winners, finalists and participants from across the history of the show and its’ international versions averaged 5.84 million viewers across the 6 episodes.

In 2015 National Geographic employed the twins as daredevil action men on the 14 part series How to Win at Everything. The series is hosted by well-known British TV/Radio Presenter Tim Shaw and airs in over 170 countries around the world.

As well as being talented actors and comedians, the boys have put their writing skills to good use and formulated a curriculum based program for secondary schools. They have also created a fun and exciting workshop for corporate groups. Stand Up And Be Counted (SUABC) is a fun team building and personal development skills workshop with the added bonus of improving the public speaking skills of participants.

They are regular radio guests offering their opinions on a range of topics from sibling rivalry to the war in Afghanistan. Whether performing stand-up comedy to a live audience or inspiring the next generation of leaders in business, The Nelson Twins are a truly entertaining comedy act and a ‘must have’ for your next corporate, sporting, social club or team bonding event.

They were utterly brilliant. Amanda kept saying to me, “What’s wrong with you?” because I was belly laughing. They had me ugly crying!

These fellas are destined to be household names – they’ve got wit, intelligence and fantastic comic timing. I hate them.

The Nelson Twins are a gift to the Comedy industry. Inspiring and hilarious, one of my truly favourite acts.

The Nelson Twins’ irreverent take on Aussie small town life was the perfect finish to our Comedy Night. Not only were the Nelson Twins the absolute consummate professions offstage but they were hilarious on stage too. They pitched their act perfectly for our audience and we’ve had rave reviews from all our guests.

Absolutely hilarious! Both Chris and Justin were a pleasure to work with, their performance was second to none and helped us successfully launch our latest venue, The Curious Squire!