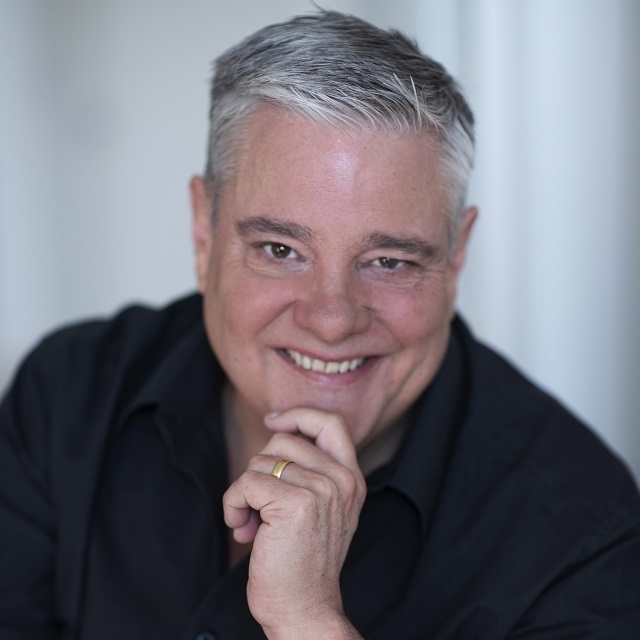 Starting out as part of iconic Australian sketch group Castanet Club and subject of the 1991 cult film of the same name, Mikey Robins made the transition to radio and television to become one of Australia’s best-loved, intelligent and in-demand entertainers on the strength of his clever observations and political savvy, quick one-liners and brilliant, biting banter.

Mikey & his co-host Helen Razer ruled the airwaves in the 90s on triple j’s national breakfast show, where they remain one of the most popular breaky teams the station has enjoyed to this day. After seven years Mikey hung up his microphone and moved into TV, swiftly becoming an audience favourite as team leader on the hugely popular, high rating Good News Week and its various franchises.

Mikey has worked for ABC radio, Vega, and Triple M and where he co-hosted Merrick… and Australia weekly with Merrick Watts and was a Grill Team regular. His numerous regular television appearances have also included co-hosting Studio 10, You Have Been Watching, regular guest spots on Sunrise, Spicks and Specks.

ABC TV featured Mikey in an episode of Australian Story, and thanks to his tremendous popularity amongst TV audiences the episode went on to become one of the highest rating episodes of the esteemed biographical program. The episode dealt with Mikey’s health and weight loss issues in a frank and very personal account. He was subsequently an interviewee on an episode of ABC TV’s acclaimed long-form interview programme, One + One with Jane Hutcheon and has cooked up a storm on 2021’s The Cook Up With Adam Liaw on SBS.

In 2016 Mikey was invited back for the Australian Story ’30 years on air’ celebration special, and that same year also joined the on-air celebrations for iconic children’s TV show Play School’s 50th anniversary. Mikey has devised and hosted a series of documentaries about Australians and their favourite pubs for Channel 10 – leading to episodes being filmed overseas – and fronted shows for the Foxtel network.

Mikey’s co-authored the books Three Beers and a Chinese Meal (with Helen Razer) and Big Man’s World (with Tony Squires and The Sandman) and written columns for The Daily Telegraph, GQ and Men’s Style. His third book, Seven Deadly Sins and One Very Naughty Fruit – a fascinating, funny and downright bizarre survey of culinary oddities was published by Simon & Schuster in 2018, followed by Reprehensible: Polite Histories of Bad Behaviour – released in 2020.

With performing stand-up comedy now included in Mikey’s long list of talents, he’s achieved successful seasons at the Melbourne and Sydney Comedy Festivals, regularly performs at Australia’s comedy clubs and cruise ships, and is a highly in-demand corporate entertainer. Mikey travelled to Afghanistan to entertain Australian troops, a moving experience which he recounted in a special piece for Australia’s Number One men’s fashion magazine, Men’s Style.

Mikey was given the honour of being chosen to perform Master of Ceremonies duties for His Holiness the 14th Dalai Lama of Tibet’s public talk at the Sydney Entertainment Centre. The day-long celebration was attended by luminaries such as Cate Blanchett and has been a highpoint in both Mikey’s personal life and career.

Skilled debater Mikey was also engaged to argue the negative for The Ethics Centre’s IQ2 Debate ‘Has political correctness backfired?’ Filmed in front of a live audience at the historic Sydney Town Hall and broadcast on BBC World News, ABC News 24 and ABC RN the debate was viewed by tens of millions worldwide. The negative team achieved a resounding win, swinging the audience from 22% ‘against’ before the event, to a whopping 69% after.

An expert facilitator who has extensive experience in the corporate and public sectors, Mikey is well known for his ability to coordinate workshops, strategic planning sessions and team-building exercises. With his academic background Mikey is able to understand and present to diverse teams, and bring an audience to its feet, its senses, and its knees – whether serving as an MC, public speaker, debater or comic.

Mikey was absolutely hysterical and his presence was thoroughly enjoyed by all. He was a really great guy and I am very happy to have had him apart of our night

Mikey was absolutely fabulous and everyone had a great time. We cannot thank you and Mikey enough for helping us out on such short notice, Mikey definitely made the evening

A wit and raconteur wrapped in a very likeable bloke