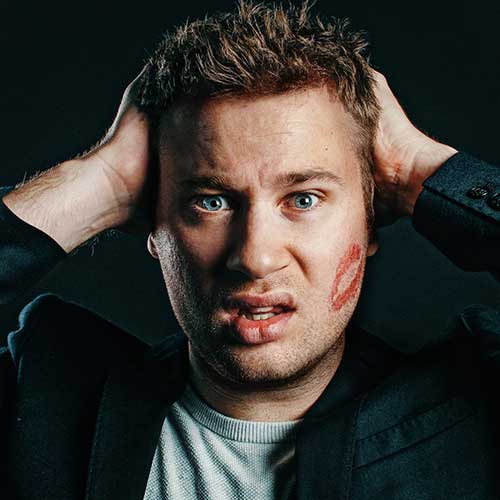 Kiwi comedian Jake Howie made his start in 2014 on the vibrant London comedy scene, where he regularly trod the boards at some of the world’s top clubs, including Top Secret Comedy Club, Brighton Komedia and Glee Club Birmingham.

After winning the Reading Comedy Festival New Act of the Year in 2015, Jake placed as a finalist in the highly prestigious UK industry showcase, the NATYS (New Acts Of Year Awards) in 2018, placing the Kiwi comedian in the company of previous finalists Russell Brand, Simon Amstell and Stewart Lee. The award-winning comedian has also been crowned winner of Blackout at Up the Creek and the New Act of the Week at the Comedy Cafe Theatre in the UK.

As a young Improv performer, Jake joined Auckland-based acting school Aspiring Young Actors as a teen and from there went on to appear in numerous Australasian TV commercials and boost his CV with professional acting work including roles with Auckland Theatre Company, Jam TV’s Working Holiday and cult New Zealand soap opera, Shortland Street. Jake has also been seen on BBC One, Twitch TV and TVNZ and heard on BBC Radio 4, Talk Radio and popular podcast, Global Pillage.

Performing at comedy clubs throughout the UK, Australia and New Zealand, Jake has taken his solo comedy shows to the Brighton Fringe, Edinburgh Fringe, Leicester Comedy Festival, Melbourne International Comedy Festival and a sell-out run at New Zealand’s home of live comedy, The Classic in Auckland.

Since moving to Australia, where he and his husband are currently based in Sydney, Jake’s star continues to rise – in 2021 he was hand-picked to perform to a sold-out Enmore Theatre for the Sydney Gay & Lesbian Mardi Gras’ comedy showcase, Laugh Out Proud, and Comedy Brew for Destination NSW’ Sydney Solstice festival.

In 2022 Jake and his Italian husband Luciano were invited guests on Australia’s leading forum for debate and powerful first-person stories, SBS TV’s Insight program. The program focused on the “In-Laws” dynamic, with Jake and Luciano shining a light on their life as a cross-cultural, same-sex couple.

Jake is 10 comedians in one man